**** The Irish Times
“Lowering The Tone? Raising the bar, more like”

Press Love for Lowering The Tone:

The Limerick Leader **** – “The ability of the BPLO to flit between the carefree swing of the undulating December, the smooth, louche lounge-lizard tones of Grace Jones, the haunted, electric-rock groove of The Devil and Me (our favourite track) and epic crescendo of Soon!, is simply remarkable.” – Alan Owens, Limerick Leader. 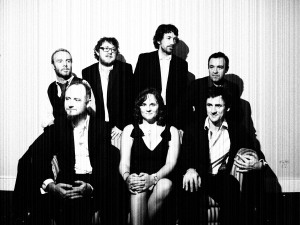 Hailing from the west of Ireland, The Brad Pitt Light Orchestra has its origins as a group of college friends drawn together from the intertwining worlds of music, theatre, family…. and IT. After parting ways due to emigration and the like, The Brad Pitt Light Orchestra (BPLO) reformed when two members – Ann and David Blake – featured on The Ray D’Arcy Show’s album ‘Even Better Than The Real Thing Volume 2’ with a haunting version of Hole in The Head by The Sugababes. The BPLO went on to produce two successful EPs, ‘Fireside Chat’ and ‘Small Contradictions’.

With an ever-increasing fan base, the BPLO first caught the attention of both Paul McLoone and Alison Curtis of Today FM with their joyful winter single December. Since then, they have recorded two sessions for The McLoone Show while also enjoying strong airplay on other national radio shows – including those of Ryan Tubridy , Ray D’Arcy, Alison Curtis, Jenny Huston, Tom Dunne, Dave Couse, Dan Hegarty and on many Independent local radio stations as well as on BBC Northern Ireland. The BPLO released their eagerly awaited debut LP ‘Lowering the Tone’ on August 27 2010.

While the three lead vocalists- Blake siblings Ann, David and James- conjure distinct moods, it is the close sibling harmonies that sit at the heart of the BPLO’s sound. Built around that glow is the formidable melodic instrumentation of the group and an irrepressible theatricality. The BPLO’s music evokes the grandeur of Arcade Fire, the warmth of Crosby Stills & Nash, the wistfulness of Belle & Sebastian, the melodic sensibility of the Divine Comedy and a whiff of a Tom Waits carnival. Arresting musicality coupled with a dark, wry wit, they produce an unmissable vibrant, life-affirming, live experience. Regular performers at Irish festivals like the Electric Picnic and Flatlake, the BPLO comfortably traverse the literary, theatrical and music worlds.

“best of the (Flatlake) fest”  – The Irish Examiner

“All dressed up for the prom, BPLO’s music is a festival of contrast and melodrama…the stark vocal contrast provided by the three Limerick siblings up front quickly lodges in the skull. It’s all the drama of ‘Phantom of the Opera’ with added indie cool.” – State Magazine