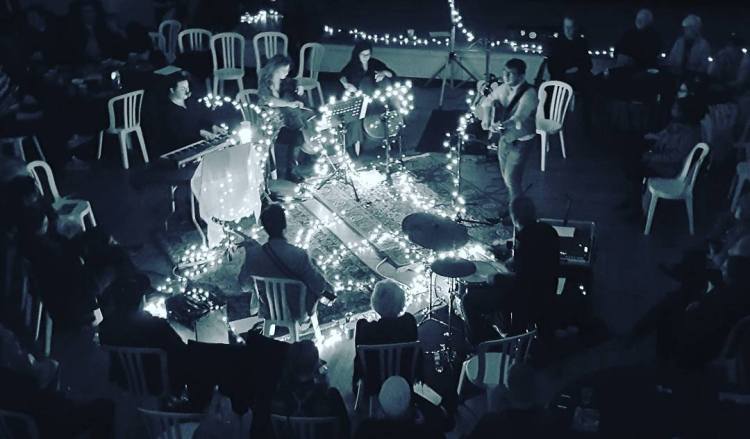 Lawrence, KS, February 23, 2017 – Lawrence-based purveyors of music from the Emerald Isle take to the Liberty Hall stage on Thursday March 16th at 7.30pm for a night of Irish songs and music, running the gamut from original compositions to songs by U2, Sinead O’Connor, Damien Rice and The Cranberries. Fronted and hosted by Lawrence resident and Irish native Nick Carswell, with his band Carswell & Hope and with special guests Ashley Davis, Cormac DeBarra, and Katlyn Conroy among others, St Patrick’s Day celebrations start early with an intimate evening of music spanning from traditional Irish tunes through to modern classics.

“After 6 years in Kansas, we have a few St Paddy’s Day musical traditions around town, for sure!” says Carswell. “This year, we wanted to do something even more special and we’re excited to team up with Ashley to share some of our favorite songs, from folk ballads through to pop tunes from the 90s. There’ll be something special for everyone at this show – which is the whole idea!”

While Carswell is an Irish transplant to Kansas, Ashley Davis has spent a lot of time traveling in the opposite direction. She studied traditional Irish music in the University of Limerick, which is also Carswell’s hometown in Ireland. The two have also been accidental neighbors in Lawrence and have collaborated more than once, including with the 2014 launch of Davis’s Night Travels record, also at Liberty Hall, which featured a performance by the fiddler Liz Carroll.

“I can’t wait to come home for St Patrick’s Day and play truly one of my favorite venues in the world, Liberty Hall,” says Davis. “Since my last Lawrence show over Christmas, I’ve been busy working on my new album in both Ireland and New York, and I’m excited to share those new songs, as well as pay my respects to some great Irish pop songs from my youth. It will be fun to share the stage with my Lawrence Irishman Nick!”

Davis also recently signed a publishing deal with New York-based Downtown Music Publishing, who will now manage her extensive back catalog of songs.

Joining the performers on March 16th is Katlyn Conroy of local favorite La Guerre, Audrey Herron on cello, with Jason Slote and Chris Handley completing the Carswell & Hope line-up. Irish harpist Cormac DeBarra will join Ashley Davis for a selection of songs from her catalog of Irish folk music.

Songs from Ireland is presented by Liberty Hall and Kansas Public Radio. Doors open at 6.30pm and the show starts at 7.30pm, with a short interval between sets.

If you would like more information about this topic, please contact Nick Carswell at (785) 424-5236 or email at carswellandhope@gmail.com.

« Pink Royal debuts new track “Do You Mind?”
Pink Royal, The Phantastics announced for Middle of the Map 2017 »